Ellen Gould was born on 31 January 1802 at Northaw in Hertfordshire, the daughter of Thomas Gould 1752-1829 of Northaw Place and his wife née Frances Hunt.
She was baptised on 30 December 1803 at St Pancras church in London.

The Reverend John Egerton 1796-1876 was Preacher from 1829 to 1849 at Bunbury church in Cheshire, where the Egerton family are commemorated on monuments.

In 1841 John and Ellen Egerton were living at Bunbury Rectory with their son Hugh and daughters Ellen, Lucy and Agnes. Staying with them at that time were the Rector of Burwash, the Reverend Joseph Gould 1797-1866 (brother of Ellen Egerton) and his wife Lydia and daughters Lydia and Ellen. The household was completed by a manservant and seven female domestics. 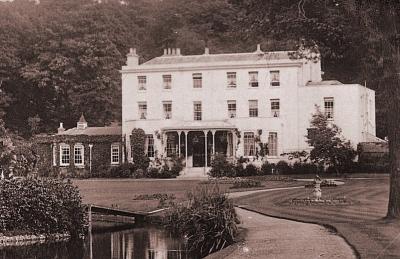 At the time of the 1851 Census, the Reverend John Egerton and his family were living at a house called Vale Mascal at North Cray in Kent (2). He then had “no cure” of souls, that is he had no parochial duties as a clergyman, having resigned the post of preacher at Bunbury in 1849. They had two sons and two daughters living at home with them, together with a governess, coachman, footman, cook, kitchen maid, housemaid and nurse. Two visitors were staying at the house, one of whom was Francis Lydia Gould, daughter of Nathaniel Gould 1787-1867, a niece of Ellen Egerton.

In 1861 the family were living at Hextable House in the parish of Sutton-at-Hone near Dartford in Kent, the principal Egerton residence which the great-grandfather of John Egerton 1796-1876 had purchased in 1733. Until the 1870s this was a quiet rural retreat for the affluent upper middle class, but as the railways developed it became an outer London commuter suburb (3).

The Reverend John Egerton and his wife Ellen had ten children, the last having the appropriate second name of Decimus. Their three eldest sons followed their father and paternal grandfather into the Church. The children were:

Charles Cadwallader Egerton. He was born on 21 January 1831 at Bunbury. and educated at New College, Oxford. He graduated Bachelor of Arts in 1855 and Master of Arts in 1858, and was a Fellow of his college until 1871. He became Rector of Weston Longueville in Norfolk in 1870.

Philip Reginald Egerton. He was born on 15 July 1832, and educated at New College, Oxford. He graduated Bachelor of Civil Law in 1857 and Master of Arts in 1885. He was appointed Warden and Master of All Saints’ School at Bloxham in Oxfordshire in 1860. He married his cousin Harriet Gould, daughter of Nathaniel Gould 1787-1867.

Hugh Aldersey Egerton. He was born on 7 February 1834 at Bunbury, and died on 5 October 1913 at Great Bedwyn in Wiltshire.

Lucy Egerton. She was born on 16 February 1837 at Bunbury. She was married to the Reverend John James Campbell, the widowed Vicar Of Great Tew in Oxfordshire. She died on 17 November 1900.

Two of the daughters of John and Ellen Egerton died young, namely Ellen Mary Egerton and Agnes Harriet Egerton, and are commemorated on a monument in Bunbury church (4).

(1) The Standard (London) dated 23 June 1828. The ceremony was conducted by the bride's brother the Reverend Joseph Gould. The marriage was also announced, more briefly, in the Morning Post dated 1 July 1828.

(2) The family moved to Vale Mascal in about 1850. "In those days it had extensive park-like gardens with tennis and croquet lawns bounded by the river Cray with weirs and cascades where the children had a little canoe. With a butler and servants in the house, [[it was the home] of a big and lively well-to-do clerical family." Their wealth came through their Gould mother. A History of All Saints’ School, Bloxham, 1860-1910 with Supplement, 1910-1925 (1925) pages 12 and 13.

(3) After John Egerton died, Hextable House became the home of the naval architect Edward James Reed. He designed the SS Bessemer fitted with a gimbel device to keep the saloon horizontal for the industrialist Sir Henry Bessemer, who suffered from sea-sickness. When the ship was scrapped in 1879, Reed had the saloon moved to Hextable House for use as billiard room. The house became Swanley Agricultural College in 1889, the first horticultural college in the world for women, and the saloon was used as a lecture hall. Unfortunately the College suffered a direct hit from German bombing in 1944 and the ruins of Hextable House were later demolished. The derelict gardens were re-developed in 1998 as a Heritage Centre based on the former Swanley Horticultural College laboratory, and now houses local artefacts and items of historical interest.

(4) The Latin inscription reads in translation: “Sacred to the memory of Ellen Mary, eldest daughter of the Reverend John Egerton MA and Ellen his wife, whose time of probation for eternity, begun 25 May 1835, was by the Lord’s mercy early concluded, and on 30 January 1847 was perfected. Her spirit, seeking the Author of Life through the sad realms of death, left her members to be hidden in the earth. Until the heavenly trumpet has sounded, dispelling with its call the slumbers of the grave, thou shalt not return. Farewell! Then once more to Thy friends, Redeemer, our hope and salvation, mayest Thou give the joys born of Thy grief. Also of Agnes Harriet, third daughter of the same parents, who entered this mortal life 12 March 1838, and on that immortal 4 May 1840.”