At that time he was serving his ministry at Whickham in County Durham (3).

In 1851 he was Vicar of Willesborough near Ashford in Kent aged 48, living at the Vicarage with his wife Elizabeth aged 36 and daughter Fanny Jane Gould aged 14 born at Baldock, employing a governess, footman, cook, and housemaid. 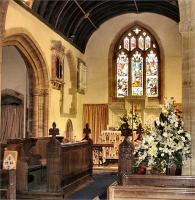 He was appointed Rector of Hatch Beauchamp near Taunton in Somerset in 1854, and remained in that parish until he retired from the ministry in 1869.

In 1871 William and Elizabeth Gould were living at Ayot St Peter near Hatfield in Hertfordshire, together with their butler, cook, lady's maid, housemaid, and (at the lodge) their gardener and his family.

Elizabeth Gould (nee Elizabeth Pryor) was the eldest daughter of Vickris Pryor of Baldock in Hertfordshire, who lived in a large house at the end of Hitchin Street in the town. He was a maltster, the youngest son of John Pryor, who was a prosperous brewer. Vickris Pryor died on 14 May 1849 aged 63 years.

The Reverend William Gould and his wife Elizabeth had one child, their daughter Fanny Jane Gould, who was born at Baldock in 1836.

She was married on 4 November 1858 at her father’s church in Harch Beauchamp to George Raban of Beauchamp Lodge in the same village. He was a Captain in the 56th Regiment of Foot. The Raban family had a tradition of distinguished army service in India.