Nathaniel Gould was born on 6 February 1787, the son of Thomas Gould 1752-1829 and his wife nee Frances Hunt. He followed his father and grandfather into the cloth trade and became a mercer in Cheapside in the city of London.

Nathaniel Gould prospered in the clothing trade. His business interests expanded beyond England. On 16 June 1828 aged 40 and described as a merchant he arrived in New York from Liverpool aboard the ship Birmingham, on a business visit.

Ten years into their marriage he was able to afford to live in considerable style at No. 4 Tavistock Square in London. In 1841 Nathaniel and Mary Gould were living there, together with Nathaniel’s younger sister Lydia Anderson (nee Lydia Gould 1795-1854), her husband and daughter. Although not then listed in the household, the family employed in the following year a servant who doubled duties as footman indoors and coach driver outdoors. He was Hezekiah Brake who afterwards emigrated to America, and in 1896 wrote and published his autobiography entitled On Two Continents: a Long Life’s Experience. He gives a fascinating account of his service at No 4 Tavistock Square during 1842 (2).

Nathaniel Gould was listed as living at No. 4 Tavistock Square in an 1848 Directory. The family appear not to be recorded in the 1851 Census, but were still there in 1860. In the 1861 Census Return Nathaniel Gould and his wife and unmarried daughters Frances and Harriet occupied the whole house, together with their butler, housemaid, cook and ladies’ maid.

Charles Dickens was a near neighbour, at the top of the row.

In the 1861 Census Return, Nathaniel Gould had been described as “Army Clothier”, and had no doubt supplied goods to the army which had fought in the Crimea from 1854 until 1856.


But Nathaniel Gould was by then far more than just a London mercer. He developed his business interests overseas. He was particularly interested in what was then the Province of Canada, and explored the business possibilities of the St Lawrence river, and became a partner in enterprises there (4).

By 1860 he had been elected a Fellow of the Society of Antiquaries, and in 1864 achieved the distinction of an entry in The County Families of the United Kingdom (5).

Nathaniel Gould was described by John Britton 1771-1857 as “My old and warm-hearted friend and neighbour" (6). 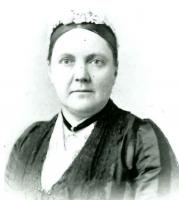 Nathaniel Gould and his wife Mary had the following children:

Nathaniel Gould. He was born in 1838. He became a Lieutenant in the 3rd Dragoon Guards, and died in 1861 in Bombay, India.