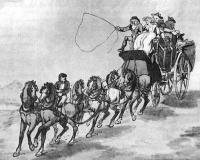 In 1842 Hezekiah Brake was employed in the service of Nathaniel Gould 1787-1867 and his wife nee Mary Crompton at No. 4 Tavistock Square in London. He doubled the duties of footman indoors and coach driver outdoors.

Soon afterwards he emigrated to America, and in 1896 wrote and published his autobiography. In it he gives a fascinating account of his service at No 4 Tavistock Square (1):

“I at last learned of a vacant place in the family of Nathaniel Gould, Tavistock Square, near Old Oxford street [[now Euston Road], where I was fortunate enough to make an engagement.

Mr. Gould was a lumber dealer, who transported the products of Canadian forests to London; he had received many handsome silver souvenirs for his success in the work. He was much engrosses with his business, which received his attention at Barge Yard, Bucklersbury, in the heart of the old city, and the family kept as few servants as possible. For this reason, I wore a footman’s livery at home and a coachman’s livery abroad. It left me little idle time, and gave me much hard work, but --- I was very glad to have the situation.

On Sundays, carrying the prayer-book, and dressed in a richly-trimmed suit with big, silver buttons, I walked behind the family of eight persons to church. On weekdays, when not otherwise engaged at home, I drove the fat black horses with the family in the carriage. The horses were rat-tailed, and wore false tails which swept the ground. I shudder to think what Mrs. Gould would have said if one of those showy horse-tails had come off at some fashionable gathering. Sometimes Mr. Gould would spend the Sabbath in driving his family to some suburb of the city, and then only was I free to seek amusement with my friends.

St. John’s Wood, Norwood, Chalk Farm and Blackheath were favourite places of resort for Londoners in 1842. As coachman, I of course had an opportunity to visit all of these places, but it was when I was ordered to follow the family to Brighton with the carriage and horses, and I knew we were really going to the seaside, that I received my first great pleasure in this service.

As usual in those times, the family traveled by stages with four horses and two postilions, the latter wearing jockey caps, leather breeches and top boots. Following Mr. Gould’s instructions to the letter, I reached Brighton in safety with my part of the charge. This popular place of resort was then considered the best of English watering-places, and the rents were very high. Mrs. Gould paid five hundred pounds sterling for the use of a mansion for three months.

The change from the turmoil of London to the refreshing breezes of the quiet sea was greatly enjoyed by each member of our large party, and by none more so than by myself. The time sped all too swiftly for our return, but at last “Bobby” and “Double” were hitched to the carriage, and as on the way down, the family started by stages with postillion, while I took the team home. Midway to London, I stopped at the Crawley Hotel for the night, and while asleep a thief entered my room, relieved me of all my money, and left me to pawn my watch for my board bill. I was half starved when at last I reached London.

Mr. Gould’s family often gave princely dinners, and as he was a very popular gentleman, and gathered a fine class of people about him, I found their conversation, which my duty as footman often compelled me to overhear, a source of education to me, and I tried to use it for my self-improvement.

I soon grew tired of this place, and gave notice that I must leave Tavistock Square. The old coachman came back, and I quitted my employer with paid-up wages, glad to be free from such servitude.”