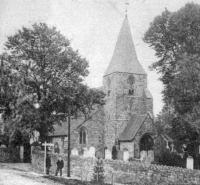 He kept detailed diaries during his ministry at Burwash, and in 1892 wrote a book entitled Sussex Folk and Sussex Ways: Stray Studies in the Wealden Formation of Human Nature (2), which is still in print.
In 1992 a book was published based on his diaries entitled Victorian Village: the Diaries of the Reverend John Coker Egerton, Curate and Rector of Burwash, East Sussex 1857-1888.

On 21 January 1875 he married Helen Breach at Holy Trinity church, Wallington near Croydon in Surrey. She was born at Carlisle in Cumberland on 19 May 1851, and known to her husband as Nellie. She was the daughter of B.B. Breach of Wallington, who had previously resided for many years at Laurelhurst in Burwash village.
The wedding service was conducted by the bridegroom's brother the Reverend Charles Cadwallader Egerton and Dr. H. Wace, the Principal of King's College, London. The honeymoon was spent at Bath and Exeter and in touring Devon (3).

Sybil Egerton. She was born on 8 August 1879 at Burwash (6). She was married in 1915 at Abingdon in Oxfordshire to Austin Charles Longland, son of the Reverend Charles Boxall Longland and his wife nee Gertrude Makins. Austin Charles Longland was born on 3 June 1888 at Brompton in Kent, and educated at Merton College Oxford and the Inner Temple. He became a barrister-at-law. In 1911 his father was Vicar of Radley, Abingdon. Sybil Longland died in 1974 at Lancaster.

Katherine Egerton. She was born in 1881. She was unmarried, and died in 1974 at Lancaster.

Their father John Coker Egerton died on 19 March 1888 aged 58 years, and was buried at Burwash on 23 March 1888 (8). The funeral service was conducted by his brother the Reverend Philip Reginald Egerton and Dr H. Wace.