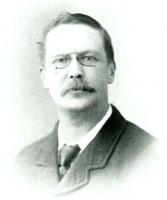 Hubert Decimus Egerton was born on 3 May 1848 at Hove in Sussex, the youngest son and tenth child of the Reverend John Egerton 1796-1876 and his wife née Ellen Gould.

On 4 November 1862 he married Annie Horner 1846-1926, daughter of Edward and Annie Horner of Herne Hill (then in Surrey, now in London). Her father was a merchant.

Ellen Dorothy Egerton. She was born on 4 November 1877 at Bloxham in Oxfordshire. She was married to Guy Archibald Forrest on 20 April 1909 at the Church of the Annunciation in Chislehurst. She died on 13 September 1964 at Westgate-on-Sea in Kent.

Annie Cecily Egerton. She was born in 1880. In 1906 she was married to Vernon Moor Allen, a stockbroker. Annie Cecily Moor Allen died on 31 January 1951 at Chislehurst.

Barbara Egerton. She was born on 31 January 1881 at Bloxham in Oxfordshire. She was married to Guy Oldfield Allen in 1909 at Bombay, India. She died on 26 February 1974 at Witley in Surrey.

Philip John Egerton. He was born in 1882. During the First World War he was wounded in action near Ypres and died on 17 October 1914.

When his brother Philip Reginald Egerton started his school in Bloxham in Oxfordshire Hubert Decimus Egerton was installed as his bursar, which office he held from 1872 until 1896. He was a land agent and surveyor by profession. He purchased the nearby grand Park Close to be his family home. The house was previously known as Bloxham Park Farm, and had earlier been the manor house of Bloxham Beauchamp (1).

When the 1881 Census was taken the family were still living at Park Close, but by 1901 they had moved to Elmstead Court at Chislehurst in Kent, and by 1911 to St Michael's Lodge at Chislehurst.

Their father Hubert Decimus Egerton died on 5 April 1932 at Derry Hill, Birchington in Kent, the home of his married daughter Ellen Dorothy Forrest.

His wife Annie Egerton née Horner predeceased him on 25 September 1926. Probate of her Will was granted on 8 January 1927 to her husband (2).

(1) Article on Park Close House http://www.bloxhamschool.com/article_41.php
A tenuous link with Park Close was maintained until the 1930s. It had been traditional for the boys to have walnuts at All Saints tide and, after the school's own walnut tree was felled, Hubert Decimus Egerton supplied nuts from Park Close, a custom continued by later owners.
(2) "EGERTON Annie of St. Michael's Lodge Chislehurst Common Chislehurst Kent (wife of Hubert Decimus Egerton) died 25 September 1926 Probate London 8 January to the said Hubert Decimus Egerton esquire. Effects £279 4s 2d." National Probate Calendar (Index of Wills and Administrations) 1858-1966 (1927) page 207.