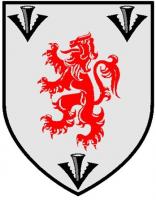 In 1841 John and Ellen Egerton were living at Bunbury Rectory with their son Hugh and daughters Ellen, Lucy and Agnes. Staying with them at that time were the Rector of Burwash, the Reverend Joseph Gould 1797-1866 (brother of Ellen Egerton) and his wife Lydia Gould and daughters Lydia and Ellen. The household was completed by a manservant and seven female domestics.

At the time of the 1851 Census, the Reverend John Egerton and his family were living at a house called Vale Mascal at North Cray in Kent. He then had “no cure” of souls, that is he had no parochial duties as a clergyman, having resigned the post of preacher at Bunbury in 1849. They had two sons and two daughters living at home with them, together with a governess, coachman, footman, cook, kitchen maid, housemaid and nurse. Two visitors were staying at the house, one of whom was Francis Lydia Gould, daughter of Nathaniel Gould 1787-1867, a niece of Ellen Egerton.

In 1861 the family were living at Hextable House in the parish of Sutton-at-Hone near Dartford in Kent, the principal Egerton residence. Until the 1870s Hextable was a quiet rural area, the retreat for the affluent upper middle class, but as the railways developed the whole area became an outer London commuter suburb (7).

The Reverend John Egerton and his wife Ellen had ten children, the last having the appropriate second name of Decimus. Their three eldest sons followed their father and paternal grandfather into the Church. The children were:

Charles Cadwallader Egerton. He was born on 21 January 1831 at Bunbury. and educated at New College, Oxford. He graduated Bachelor of Arts in 1855 and Master of Arts in 1858, and was a Fellow of his college until 1871. He became Rector of Weston Longueville in Norfolk in 1870.

Philip Reginald Egerton. He was born on 15 July 1832, and educated at New College, Oxford. He graduated Bachelor of Civil Law in 1857 and Master of Arts in 1885. He was appointed Warden and Master of All Saints’ School at Bloxham in Oxfordshire in 1860. He married his cousin Harriet Gould, daughter of Nathaniel Gould 1787-1867.

Hugh Aldersey Egerton. He was born on 7 February 1834 at Bunbury, and died on 5 October 1913 at Great Bedwyn near Hungerford, Berkshire.

Lucy Egerton. She was born on 16 February 1837 at Bunbury. She was married to the Reverend John James Campbell, the widowed Vicar Of Great Tew in Oxfordshire. She died on 17 November 1900.

Two of the daughters of John and Ellen Egerton died young, namely Ellen Mary Egerton and Agnes Harriet Egerton, and are commemorated on a monument in Bunbury church (8).