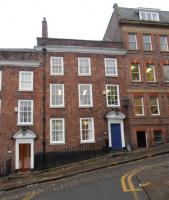 He became a solicitor, and was in practice as Gould and Brookfield at 4 Paradise Square in Sheffield, by the parish church now the Cathedral. He married Frances Maria Brookfield 1805-1888, daughter of another Sheffield solicitor Charles Brookfield, his partner in the firm of Gould & Brookfield.

The Gould family lived at 32 Wilkinson Street, near Paradise Square, and had the following nine children, all born in Sheffield:

William Gould 1838-1886. He became a solicitor and was in practice at Todmorden in Yorkshire. In 1863 he married Martha Ann Vaughan 1841-1880 at Llandrinio, Montgomeryshire. She was a daughter of Edward Vaughan 1794-1852 and his wife Martha Whittingham 1803-1879. Their son Lewis Edward Vaughan married Frances Maria Gould 1847-1898, and had three children who died in infancy.

Thomas Gould 1841-1908. He also became a solicitor, and eventually took over the practice of his father at Paradise Square.

Francis Gould 1843-1902. He was educated at Sherborne School and at Trinity Hall, Cambridge. He became a barrister of such eminence that he was authorised to write reports of law cases for the profession. He was unmarried, and lived in lodgings at Chalcot Crescent, Regents Park Road in London. His chambers were at No 6 New Square in Lincoln’s Inn.

Their father Thomas Gould died in 1869.

Her brother was the Reverend William Henry Brookfield 1809-1874, a close friend of Alfred Tennyson and Arthur Hallam, whom he met at Cambridge. In 1841 he married the much younger Jane Octavia Elton 1821-1896. They had the following children:

Charles Hallam Elton Brookfield 1857-1913. Although initially training as a solicitor he gave that up, and despite family opposition, became a famous actor. In 1884 he married Frances Mary Grogron 1858-1921. The two of them wrote a popular book about their mother called "Mrs Brookfield and Her Circle".

In 1900 there was a literary sensation, when Thomas Gould 1841-1908, who had succeeded his father in the family firm, discovered in their cellars some manuscripts originating from the friendship of his uncle William Henry Brookfield 1809-1874 with Tennyson, Arthur Hallam and other friends.

"Sheffield has its holy places for the student of literature, and one of these [is] ... Southbourne, Clarkehouse Road ... It was there that during the first half of the nineteenth century Mr. Charles Brookfield, of the firm of Brookfield and Gould, solicitors, of Paradise Square, resided ... Charles Brookfield had a son, William Henry Brookfield ... the friend of a good number of the men who moulded the thought and the history of the nineteenth century, for Great Britain at least. Tennyson, Arthur Hallam, Charles Beliler, the brilliant lieutenant of Lord Durham in the Canadian mission, Thackeray, Trench - afterwards Archbishop - F. D. Maurice, Monckton Milnes, Carlyle, Gladstone, and - James Montgomery - who he irreverently styled “Jingling James,” were among his friends ...

William Henry Brookfield was the same age as Tennyson, both men having been born in the same month the year 1809 ... "an essentially original man, who did nothing commonplace” and his originality was even displayed in his method entering Cambridge in 1829. He went up to Trinity a sizar - receiving his food free, but ranking below the ordinary students. Having sacrificed his articles, which had cost his parents some hundreds of pounds, and having turned his back upon the profession chosen for him, he, in extenuation, thought thus to save their purse; and they, Spartan parents of the period, who expected implicit obedience, sternly allowed him for a term to remain in that position; afterwards they placed him in the college on a proper footing. At Cambridge Brookfield soon became the friend of the a little society of undergraduates who met weekly in the rooms of one of their number,

'Where once we held debate, a band
Of youthful friends, on mind and art
And labour and the changing mart,
And all the framework of the land.'

Tennyson’s description in "In Memoriam" of the meetings of the Apostolic band, of which he was himself a member, affords some idea of the high thinking to which the brethren were devoted. Brookfield, in due course, entered the Church, became successively a curate in Southampton, and in London, an inspector of schools, and chaplain-in-ordinary to Queen Victoria. He was one of Tennyson’s friends to the end, which came for Brookfield at the beginning of 1874. In the present Lord Tennyson's life of the Poet Laureate is a letter of condolence written by Tennyson to W. H. Brookfield’s widow on the death of her husband ...

Sheffield loomed less largely in Brookfield’s life as time went on, but interesting evidence of his friendship with Tennyson and Arthur Hallam came to light in the city so recently as eight years ago. On that occasion a number letters from and Hallam to Brookfield were found by Mr. Thomas Gould, the son the partner of Charles Brookfield, when turning over an old box which had been lying in his office for over 60 years. Besides the letters the MSS included portions of “The Lotus Eaters" and "The Lady of Shalott" believed to be in Hallam’s handwriting. The letters also included one from Thackeray to Brookfield. Tennyson and Hallam visited Brookfield in Sheffield in 1831, but the latter’s family had not then gone to live at Southbourne, but resided in Paradise Square ...

In 1875, the year afler Brookfield’s death, a volume of his sermons was published - for Brookfield had proved an exceedingly popular preacher. Tennyson wrote for the book a delightful tribute to his friend, which affords one some idea the charm which “Old Brocks” ... exerted over those with whom he came into intimate association:

"Old Brooks, who loved so well to mouth my rhymes,
How oft we two have heard St. Mary’s chimes ;
How oft the Cantab supper, host and guest,
Would echo helpless laughter at your jest!
How oft with him we paced that walk of limes,
Him, the lost light of those dawn-golden times" (2).

"Students of Tennyson will be familiar with the fact that among the poet's college friends was William Henry Brookfield, whose death called forth the sonnet - 'Brooks, for they call'd you so who knew you best.' Brookfield was the son of Charles Brookfield, of the firm of Brookfield and Gould, solicitors, 4, Paradise Square, Sheffield. Recently Mr. Thomas Gould, son of the Gould mentioned above, and now head of the firm of Gould and Coombe, of 4, Paradise Square, when turning over an old box which had been lying in the office for sixty years or more, found a packet of old papers -" sallow scraps of manusoript"- which proved to be letters from Tennyson and Arthur Hallam to W.H.Brookfield, together with portions of manuscripts of "The Lotus Eaters" and "The Lady of Shalott".

The letters are undated, but the postmarks show them to have been written in 1832 and 1833. This was shortly after Tennyson left Cambridge, and about the time of the publication of his first book of poems, which was printed in 1832, though it is generally spoken of as the edition of 1833. Most of the correspondence is of a very personal and intimate character, such as might pass between college chums writing freely to each other. But in Tennyson's letters there are allusions and references of much interest to students of the late Laureate. For instance, he refers to the fears that overtook him at this time about his eyesight - fears which are mentioned in the life published by the present Lord Tennyson. There are also strongly-worded protests against publication ot his poems in the magazines of the day. Evidently Tennyson was much pressed to contribute to these periodicals, and had difficulty in shaking off the importunity of editors and friends.

The letters from Arthur Hallam are extremely interesting as showing his deeply religious feeling and the high tone which characterised his lightest thought ... the MSS of " The Lotus Eaters " and The Lady of Shalott" is in the handwriting of Arthur Hallam. Probably Hallam copied the earliest of these poems, and sent the MSS to Brookfield, who, after leaving college was not so much in Tennyson's company. There has been no opportunity of comparing these versions of the poems with the version published in 1833, but there seems no reason to doubt that the stanzas are substantially the same. Both poems were afterwards very much altered. In the edition of 1842 "The Lotus Eaters" was almost entirely recast, and some sixty or seventy lines of "The Lady of Shalott" were altered (3).

"The MSS and letters are understood to have been handed over to Colonel Brookfield M.P., the eldest son of the late Mr. W.H. Brookfield (4)".

Sadly Thomas Gould 1841-1908 who discovered the documents came to a tragic end. "Mr. Tbomas Gould, the firm of Gould and one of the oldest practicing solicitors in Sheffield, was found drowned in the river Derwent at Hathersage, on Saturday. He left his office on Monday week, with the intention of fishing, and nothing more was heard until Saturday night, when his body was found by another angler. The deceased had evidently been wading, and it thought he tumbled and fell into a deep pool. He was about 65 years of age ... Recently, Mr. Gould, in turning over old box which had been lying in the office the firm for sixty years or more, found a packet of papers which proved to be letters from Tennyson and Arthur Hallam to Mr. W.H.Brookfield, together with portions of the manuscript of "The Lotus-eaters" and "The Lady of Shalott." The letters were undated, but the post-mark showed them have been written in 1832 and 1833 - shortly after Tennyson left Cambridge, and about the time of the publication of his first book of poems. At the inquest, on Monday, a verdict of 'Accidental death by drowning' was returned (5)".