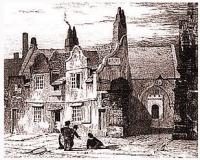 Philip Hunt was born on 1 January 1772 in Herefordshire, the son of Thomas Hunt and his wife nee Cicely Hodgson, and was baptised on 31 January 1772 at St Nicholas parish church in Newcastle-on-Tyne. He was educated at the Royal Grammar School in Newcastle-on-Tyne (1). His father had business interests there (2), although his principal residence was in Herefordshire (3).

On 29 October 1788 he entered Trinity College in Cambridge aged only sixteen years, matriculating at Michaelmas. He graduated Bachelor of Arts in 1793 and became Master of Arts in 1799 (4). He was awarded the degree of Doctor of Civil Law in 1817 (5). He entered the ministry of the Church of England, being ordained deacon on 21 September 1794 and priest on 21 February 1796 at Lincoln. The Reverend Philip Hunt served his title as Curate of Houghton Conquest in Bedfordshire to which he was appointed on 21 September 1794.

He was a Fellow of the Society of Arts, and a Magistrate for the County of Bedford for nearly thirty years. He was an influential Prison Visitor at Bedford Prison, a role that set him among the important prison reformers of the early nineteenth century (9). He was also a House Visitor to the General Kent and Canterbury Hospital (10).

At at time when radical reform was being demanded, and gradually effected by Whig politicians, the practice whereby clergymen held several parishes or other benefices in plurality was questioned. Despite his acknowledged good works in the Bedfordshire parishes, for which he was publicly thanked (11), Philip Hunt was criticised in the press for holding several such benefices and offices, and was especially vulnerable as a staunch supporter of that reforming party (12). Philip Hunt responded rejecting such criticism, explaining that when appointed to the vicarage of Aylsham, admittedly by the patrons the Dean and Chapter of Canterbury of which he was by then a member, he held only that benefice and his prebend or canonry at Canterbury. His responsibilities in the cathedral were not a full time preoccupation and, as with many other clergy similarly placed, he was able to minister effectively in a parish (13).

He was appointed Chaplain and Private Secretary to the Earl of Elgin 1799 (14), and Chaplain to the Levant Company 1799 (15), and received permission from the Bishop of Lincoln to be temporarily absent from his Bedford parish. The 1799 appointments were made in connection with his accompanying the newly commissioned ambassador the Earl of Elgin to take up the post of British ambassador to the Ottoman Empire in Constantinople (16). From 1799 to 1803, as well as performing the duties of chaplain, he became involved in diplomatic affairs including gathering intelligence in Greece and fostering goodwill.

While in Athens, then under Ottoman rule, Philip Hunt was dismayed by the destruction of the ancient buildings on the Acropolis, which had become a military fort. He decided to remove some of the sculptures from the Parthenon. With permission from the Ottoman authorities, he organised the removal of sculptures and their safe transport to England. They became known as the Elgin Marbles, and are now in the British Museum in London.

On his return overland through France, he was detained and imprisoned for two years by Napoleon Bonaparte, eventually returning to Bedford in October 1805 after an absence of six years (17). He moved from Bedford to Aylsham in 1835 (18).

The Reverend Dr Philip Hunt was unmarried, and during the last years of his life he was attended by his favourite niece Frances Gould 1789-1843 (19).

"The church there has a wall monument which describes him as 'a powerful preacher, an elegant scholar and active magistrate'.
After his death letters of tribute flowed in to his niece, but real public acknowledgment of his truly remarkable efforts never came" (20).