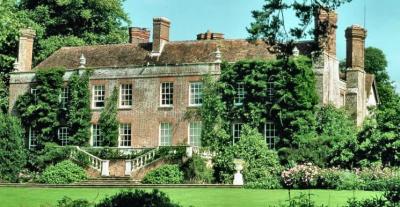 The Wetherell family had long been resident at Pashley House in Ticehurst, Sussex (2).

Their three children were:

Ellen Lydia Richarda Wetherell 1843-1915. She was married at Ticehurst on 29 June 1865 to Edward Ommanney Capron Hollist, the son of Hasler Hollist. They had five children.

Harriet Elizabeth Wetherell. She was born on 1 October 1847 at Hawkhurst in Kent, and was baptised on 24 December 1847 at St. Pancras Church in London. She was unmarried. Towards the end of her life she lived at Pashley House with her widowed sister Susan Margaret Darby. She died in 1921.

In 1841 Nathan and Susan Wetherell resided in Great Coram Street in Bloomsbury, London, with daughter Susan Wetherell born in the previous year. Nathan Wetherell was a barrister-at-law in actual practice. Also recorded with them was Francis Gould aged 50 and of independent means. The family had one female servant.

At the time of the 1851 Census the family were living at No 10 Cannon Place in Brighton, Sussex. By then two more daughters had been born, Ellen and Harriet.

In 1860 Nathan Wetherell had addresses at 14 Russell Square and at 3 Old Square, Lincoln’s Inn, his barrister chambers.

There seems to be no record of the family in the 1861 Census, but they were residing at Pashley House in 1867 (3). Nathan Wetherell was then still a practising barrister and also a magistrate. With them there in 1871 were their unmarried daughter Harriet Wetherell, their married daughter Ellen Hollist with her husband and family, together with a butler, ladies’ maid, housemaid, kitchen maid, and nurse.

In 1881 widower Nathan Wetherell was still living at Pashley House, with his widowed daughter Susan Darby, together with her butler, ladies’ maid, housemaid, kitchen maid, nurse, and page.

(1) Bury and Norwich Post 24 October 1838; Ipswich Journal 27 October 1838.
(2) Ticehurst is a village in East Sussex between Tunbridge Wells and Rye. "Pashley House, built in the reign of James I. is here ; the interior has fine antique oak carvings, wainscot and panelling, and the green-house contains varieties of flowers and foreign plants ; the manor and estate formerly belonged to the family of Pashley ; in the reign of Henry VIII it became the property of the May family, and Caroline, the only surviving daughter of Thomas May, esq. married the Rev. Richard Wetherell, from whom the manor and estate descend to the present proprietor, Nathan Wetherell, esq. J.P." Kelly's Directory 1878. Nathan Wetherell had married Susan Gould 1805-1879.
(3) Kelly's Directory 1867.
(4) "Wetherell Nathan Esq. 9 June. The Will with a Codicil of Nathan Wetherell late of Pashley Ticehurst in the County of Sussex Esquire who died 7 February 1887 at Pashley was proved at Lewes by Susan Margaret Darby Widow and Harriet Elizabeth Wetherell Spinster both of Pashley the Daughters the Executrixes. Personal Estate £56,064 11s 5d." England and Wales, National Probate Calendar (Index of Wills and Administrations) 1858-1966 (1887) page 66.