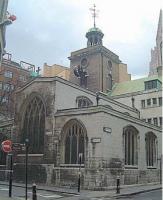 This medieval church survived the Great Fire of London in 1666. The flames came within a hundred yards but then the wind changed direction (1).

After their marriage, William and Mary Gould lived at Barton House at Barton-on-Irwell near Manchester.

By 1787 William Gould was a merchant trading in Manchester in partnership with his brother Nathaniel Gould 1756-1820 as wholesale linen drapers and fustian manufacturers under the name of William and Nathaniel Gould & Co. (Fustian is a heavy woven cloth made from cotton or wool with linen, chiefly for menswear.) A third partner, Josiah Richardson Saunders 1753-1827, was the brother of Mary Saunders.

William Gould and Mary his wife had two daughters :

They may have also had a son, William Gould, who was baptised at St Ann's church in Manchester on 12 November 1777. If so, then he seems to have died before the decease of his mother on 1 November 1829, as the daughter Mary was the sole heiress.

(1) Unfortunately it was gutted by German bombs in 1941, but enough remained for restoration in 1954. It retains some of its ancient atmosphere that William and Mary Gould would have known, as would the diarist Samuel Pepys who is buried in its nave. King Haakon VII of Norway worshipped in the ruins until his return home in 1945. He led the re-dedication in 1954 when he laid a stone from Trondheim cathedral before the altar.
(2) The London Gazette dated 2 January 1787.
(3) The London Gazette dated 13 June 1789.