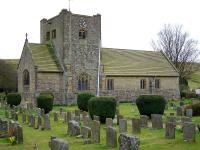 He was educated at Marlborouigh School (1) and Brasenose College Oxford, where he graduated BA in 1868. He held several curacies from 1872, including that at St Mary Bishophill Senior in York, and became Vicar of Goathland in Yorkshire in 1883 (2).

When the 1881 Census was taken he was Curate of Whitby in Yorkshire.