Her father was a Captain serving in the Royal Artillery in 1871 and a retired Lieutenant-Colonel in 1881. The family lived at Lodsworth House near Midhurst in West Sussex and 50 St. James's Square in London.

When the 1881 Census was taken May Capron Hollist (1) was visiting the household of the Reverend John C. Mace, an Australian clergyman born in Sydney, living at 16 Grove Road, South Hackney in London. She was then described as a "Parish Worker", and the census enumerator added "preacher". 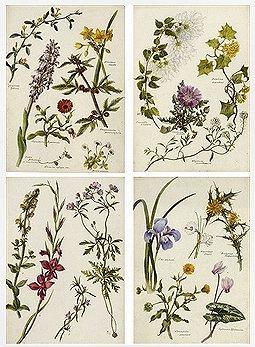 In 1901 she was "living on own means" boarding at 84 Union Road, Rotherhithe in London. In 1911 she was living of "no occupation" at 50 Uxbridge Road, Hanwell in Middlesex, which was St. Joseph's Convent House (2).

May Capron Hollist was an invalid for much of her life. She was an accomplished artist, painting as an escape from the bleakness of her daily life into a world of beauty (3). In her later years she travelled around Europe, painting plants and animals in watercolour. On 1 March 1929, for example, she sailed to Malta on the Peninsula & Orient Steam Navigation Company liner "Ranchi" bound for Bombay in India. She was then living at 50 Stratford Street, London W8 (4).

She was involved in the formation of the Girl Guide Association, and was a member of the Council when the Association received its Royal Charter in 1922. She received royal recognition of her work for the Girl Guides from King George V.

While working for the Association she met Mary Jennings, who was her companion for the last twenty years of her life.

(1) The 1871 Census Return, when she was living at home at Lodsworth, incorrectly recorded her as "Mary" instead of May.
(2) St. Joseph's was a Roman Catholic church, founded in 1853 for Irish labourers building the local viaduct on the Great Western Railway.
(3) A collection of 53 of her watercolours of wild flowers, which she had given to her friend Mary Jennings and had descended to the vendor, was sold by auction at Christies in London (Sale 7591 Lot 37) on 4 June 2008. The collection was described as "including twenty-two double-sided sheets numbered variously 1-44 and 1-24 and inscribed variously with Latin names of the flowers pencil and watercolour _14 x 9 7/8 in. (35.5 x 24.6 cm.); and smaller; with two accompanying letters detailing and correcting the Latin names". The price realised was £8,750 (including buyer's premium). The estimate had been £5,000-£8,000.
(4) Names and Descriptions of British Passengers embarking at the Port of London 27 February 1929 P.& O. Steam Navigation Company liner "Ranchi".