Anthony May Capron Hollist was born on 19 July 1873 at Plumstead in Kent, the son of Edward Ommanney Capron Hollist and his wife nee Ellen Lydia Richarda Wetherell. He was baptised on 7 September 1873 at Lodsworth, Sussex (1).

The family lived at Lodsworth House near Midhurst in West Sussex and 50 St. James's Square in London.

When the 1901 Census was taken he was a Second Lieutenant in the Army in barracks at Harrow Road, Aldershot in Hampshire.

On 4 October 1902 at Lodsworth he married Katherine Barker, the only child of Theodore Barker, solicitor of Gray's Inn in London and West Meon near Petersfield in Hampshire. She was born in 1878 at Surbiton in Surrey. 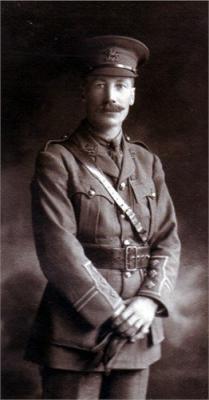 In 1911 Lieutenant Hollist and his wife were living at Highbuilding House in Fernhurst in Sussex,with a nurse for their infant daughter and also a cook, parlourmaid and housemaid.

They had one child:

Susan Capron Hollist She was born on 12 May 1912 at Highbuilding House, Fernhurst. She died in 2006.

During the First World War Anthony May Capron Hollist served on the Western Front in France as Captain in the East Kent Regiment (The Buffs) "A" Company 8th Batallion.

On 27 September 1915 Captain Hollist was killed in action at Loos aged 42 years. He is commemorated on the Loos Memorial and on the War Memorial at Lodsworth.

(1) May was a family surname, being that of his great-grandmother Caroline May 1776-1833 of Pashley who was married to the Reverend Richard Wetherell 1773-1859. The Mays were a distinguished family dating back to Richard May who lived during the fifteenth century: Arms of Sussex Families by J.F. Huxford (1982).