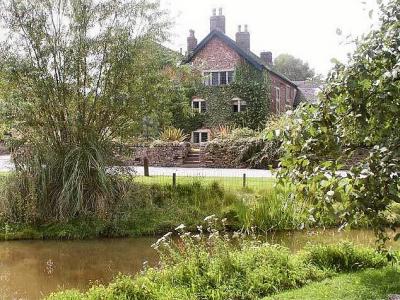 Elizabeth Carrington was born in 1809 at Croxden in Staffordshire, the daughter of William Carrington 1752-1840 and his wife née Elizabeth Shaw 1764-1852.

By 1851 was farming 700 acres at Blore Hall, employing a governess and ten workers including two indoor female servants and two male farm labourers. With them also in 1851 was his widowed mother-in-law Elizabeth Carrington née Shaw 1764-1852 (born at Eaton, Doveridge parish in Derbyshire).

William Carrington Smith. He was born in 1831 at Mayfield.

John Smith. He was born in 1835 at Blore. He farmed at The Spond, Alton in Staffordshire. He married Margaret Wood on 11 May 1864 at the parish church of Grendon near Atherstone in Warwickshire, and they had six children. She was born at Grendon in 1842, the daughter of Thomas Wood, farmer, and died in 1914 aged 72 years. John Smith died in 1912 aged 77 years.

Arthur Sydney Smith. He was born in 1843 at Blore. By 1869 he was living at Groby in Leicestershire. On 29 October 1869 he married his cousin Martha Parramore at Ilam church in Staffordshire (2). She was born in 1837 at Ilam, presumably at Throwley Hall, the only daughter of Francis Allen Parramore 1795-1862 of Throwley Hall in Staffordshire and his wife née Mary Carrington 1799-1875.

Their father Thomas Smith died in 1855, and was buried at Blore.

She died in 1873, and was buried with her husband Thomas Smith at Blore where they share a gravestone.

(1) The photograph of Blore Hall as it appears at the present day is included by kind permission of the photographer Peter Cox, originally published on his website http://www.snapthepeaks.co.uk/
(2) "Marriages ... On the 29th ult., at Ilam Church, Staffordshire, by the Rev. James Bardsley, M.A., rector of St. Ann's, Manchester, Arthur Smith, Groby, Leicestershire, youngest son of the late Thomas Smith, Blore Hall, Staffordshire, to Martha, only daughter of the late Francis Allen Parramore, of Throwley Hall." Leicester Chronicle 16 October 1869.
The bride and bridegroom were first cousins: the mother of the bride was Mary Parramore née Mary Carrington 1799-1875, sister of the bridegroom's mother Elizabeth Smith née Elizabeth Carrington 1809-1873.