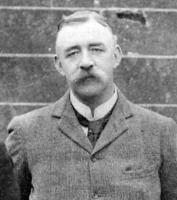 Marius Herbert Gould was born on 10 March 1851 at Broughton near Manchester, the son of Philip Gould 1803-1890 and his wife nee Mary Burrell otherwise Hayley (1).

He was educated at Manchester Grammar School until he reached the sixth form, and then transferred to Marlborough College in Wiltshire in 1868. He won a scholarship to Trinity College, Oxford in 1870 (2), where he won many prizes and became a first class scholar. Marius Gould graduated Bachelor of Arts in 1875 and Master of Arts in 1878.

He contemplated a career as a barrister, and was a student of the Inner Temple. He passed all the examinations but was never called to the Bar (3). He also thought of becoming a politician, but did not do so. He has been labelled as a Conservative, that is not correct. He was a Liberal Unionist, as were most of the staff of Marlborough College. That was a party led by Lord Hartington (later the 8th Duke of Devonshire) that broke away from the Liberals when Gladstone favoured Home Rule for Ireland (4). Eventually they merged with the Conservatives, but Marius Gould only half-heartedly supported a local Conservative Club, not actually attending a meeting (5).

Instead of become a lawyer or a politician Marius Gould became a schoolmaster, and returned to his old school as an Assistant Master in 1875. By 1881 he had become the Housemaster of Cotton House at Marlborough College, which had 42 boys boarding ranging in age from thirteen to eighteen years according to the Census taken in that year. By 1901 the number of boys in his care was 29, and Cotton House then had on its staff a matron, cook, three housemaids, a kitchenmaid, a parlourmaid, butler and footman. With them at that time was his unmarried sister Florence Helena Gould, presumably on a visit to Marlborough when the Census was taken. By 1905 he was the Secretary to the Marlborough College Mission Fund, providing an income for the college's mission at Tottenham in London (6).

Marius Herbert Gould was a greatly loved and revered housemaster at Marlborough. He retired in 1910, and when the 1911 Census was taken was living at the Hotel Victoria, Northumberland Avenue in London. He never married (12).

He died on 16 November 1918, and was buried at Burwash, a village in Sussex where he had cousins.

(1) She was the eldest daughter of the Reverend John Burrell 1781-1850, Rector of Brightling. John Burrell later changed his name to John Burrell Hayley, and his family thereafter had the surname Hayley.
(2) He was one of only three winning the scholarships out of a field of 33 candidates. "The scholarships are of the annual value of £80 ad are tenable for five years": Pall Mall Gazette 1 February 1870; Western Daily Press 1 February 1870; Manchester Times 5 February 1870; Reading Mercury 5 February 1870.
(3) The Precariously Privileged: a Professional Family in Victorian London Zusanna Shonfield (1987) page 167.
(4) He delivered a rousing speech at a Liberal Unionist meeting in Marlborough in 1890, for instance, which was well received: Devizes and Wiltshire Gazette 29 May 1890.
(5) At the opening of the Bateson Conservative Club in Devizes a letter was read out from the absent "Mr. Gould, of Marlborough College, who had promised to attend at some future time (cheers)": Devizes and Wiltshire Gazette25 November 1886.
(6) Marlborough College Register from 1842 to 1904 inclusive (1905) page 673. Serving as curate at St Mary's mission church was the Reverend Arthur Robert Anderson 1859-1950 who later became the Vicar of St Mary's parish church.
(7) "Sassoon's housemaster, a bachelor of fifty with a booming clubman's voice and a military moustache called Marius Herbert Gould ... Some academic Marlburians found Gould, with his Oxford First in Greats, a good teacher; to Sassoon, the housemaster spoke usually in a bantering, sometimes angry, often preposterously orotund manner, the aftermath of an earlier ambition to be a barrister and Conservative politician ... Only at night, when he thought he was asleep, did Gould show affection, muttering a gruff ‘Good-night, you Siegfried’ on his dormitory round." Siegfried Sassoon: A Biography Max Egremont (2006) page 25. Sassoon seems to have been a problem at Marlborough, and Marius Gould's parting words to him were "Try to be more sensible!" Siegfried Sassoon: a Critical Study Michael Thorp (1966) page 124. Yet Sassoon himself thought well of his housemaster. "Good old Gould! Successive generations of Marlburians took him for granted as a person whose oddities of behaviour were there to be made fun of. But he had much in him that was kindly and gentle" The Old Century and Seven More Years volume 1 (1939) page 192; Haydn and the Valved Trumpet Craig Raine (2012) page 166.
(8) "Personally I found that the best time at M.C. [[Marlborough College] was the earliest - the days under Gould ... when one could dream of future greatness." The Letters of Charles Sorley, with a Chapter of Biography (1919) page 101 (Letter to A.N.G. Peters). "Crouched where the open upland billows down/Into the valley where the river flows,/She is as any other country town,/That little lives or marks or hears or knows./And she can teach but little. She has not/The wonder and the surging and the roar/Of striving cities. Only things forgot/That once were beautiful, but now no more,/Has she to give us. Yet to one or two/She first brought knowledge, and it was for her/To open first our eyes, until we knew/How great, immeasurably great, we were." Marlborough, and Other Poems (1919) page 23.
(9) "It was largely due to Marius Gould that I went up to Oxford fully determined to cut a figure at the Union if I could. He survived at Marlborough long enough to be housemaster to my nephews, and finally settled in London" : Memories and Notes Anthony Hope Hawkins (1928) page 43. Under the pen-name Anthony Hope, Hawkins wrote The Prisoner of Zenda and several other popular novels.
(10) In his autobiography he recounts an incident in which his carefully prepared joke on Gould went badly wrong, touchingly revealing an unexpectedly vulnerable side of Gould's personality: Incidents and Reflections (1947) John Black Atkins page 31.
(11) R.L. Reiss - A Memoir by Celia Reiss (1965).
(12) His attachment to Jeanette Marshall in 1889 ended because he thought he had insufficient income to marry: The Precariously Privileged: a Professional Family in Victorian London Zusanna Shonfield (1987) pages 166 to 174. For over twenty years Jeanette Marshall recorded her impressions of drawing room society in late Victorian London. Persistently seeking a husband, and steering between realism and frivolity, she vividly described her meetings with Marius Gould in Italy and Switzerland.