Lucy Moss King was born in 1875 in India, the daughter of the Robert Moss King and his wife née Elizabeth Augusta Egerton.

In 1881 she was living aged six years old with her aunt Mrs Lucy Campbell in Wimborne Minster. Her parents were in India. 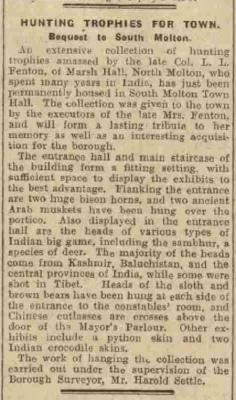 In 1903 she was married to Layard Livingstone Fenton of Marsh Hall, North Molton in Devon. He was born on 14 October 1849 at Bombay in India, the son of the Reverend George Livingstone Fenton and his wife nee Mary Ann Lloyd (1), and educated at the Royal Military Academy in Woolwich, serving in the Royal Artillery (2). He became a Lieutenant-Colonel in the Indian Army.

He had married Katherine Isabella Ashburner on 10 March 1874 at Quetta in India, and they had three children. She died in 1891.

In 1886 he had an encounter with a lion, widely reported in the English press "Our experienced and successful shikaree, Captain L.L. Fenton, Superintendent of Surveys under the Rajasthan Court, had some rather exciting sport in the Ghir during the last hot weather, and finished up with an exceedingly narrow escape for his life. A lion had been discovered lying down under a banyan tree. Captain Fenton commenced to creep up to within shot ... when a couple of samba broke cover close to him and startled the lion" which ran into a crowd of sepoys who fired shots at it. He rushed to the scene. Breathless he fired but only wounded the lion, which came straight for him. Reaching for his second gun his next shot "was true enough this time" (3).

His book The Rifle in India: being the Sporting Experiences of an Indian Officer was published posthumously in 1923.

Lucy Moss Fenton died at Marsh Hall on 22 February 1937, "a regular worshipper at South Molton Parish Church and a supporter of the Conservative cause. She was well-known as a breeder of dogs. She leaves a brother, Sir Carlton [[sic] King, who resides in Jersey (7)."

Her Will was proved on 4 January 1922 (8). Her executors donated her late husband's collection of hunting trophies to the town of South Molton in Devon (9). Some were retained, and a leopard skin and a spotted panther skin were offered for sale by auction in 2011 (10). Marsh Hall is now a country house hotel.