Carleton Moss King was born on 17 July 1878 at Meerut in India, the son of the Robert Moss King and his wife née Elizabeth Augusta Egerton.

He was educated at Brighton College and Balliol College in Oxford (1). He won an Award of Honour in the Oxford Honour School of Greek and Latin Literature in 1899 (2).

After passing the qualifying examination he entered the India Civil Service in 1901, and arrived in India on 15 November 1902.

He was appointed Assistant Magistrate and Collector in the United Provinces (3), a Judge of the High Court of Judicature at Allahabad on 18 October 1919 (4), and the Chief Judge of the Chief Court of Oudh in 1934.

On 11 November 1909 he had married Fanny Helen Cruikshank at St Stephen's church, Kensington in London. She was known as Nell, and was the daughter of Alexander Walmesley Cruikshank ICS 1851-1925 and his wife née Fanny Nina Daniell 1861-1944.

In retirement they returned to England and lived at Wildacres, Fleet in Hampshire (8). 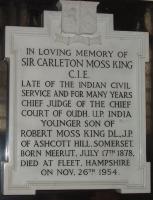 Cecily Moss King. She was born on 14 January 1914. During the Second World War she joined the WAAF and became a Section Officer. She was married to Flight-Lieutenant Francis Michael Doran FRCS RAFVR 1910-1995 on 25 May 1943 at All Saints' church in Fleet, Hampshire (9). She died in 1988 at Hereford aged 74 years.

Sir Carleton Moss King died on 26 November 1954 at Fleet in Hampshire, and is commemorated by a monument in Ashcott parish church, Somerset (10).