James Richard Anderson was born in 1824 at Northaw Place in Hertfordshire, the country home of his grandparents Thomas Gould 1752-1829 and his wife née Frances Hunt. He was educated at school in Bury St Edmunds in Suffolk. 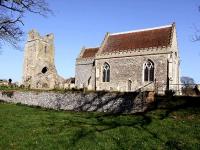 On 1 April 1842 he entered Trinity College, Cambridge. He graduated Bachelor of Arts in 1846 and was ordained deacon in that year at Ely Cathedral and priest in 1847 in Worcester Cathedral. He was Rector of Barningham Winter in Norfolk from 1851 to 1866 and priest-in-charge of West Beckham near Cromer in Norfolk from 1856 to 1866 (1).

He married Elizabeth Julia Pellew at in Bury St Edmunds on 19 August 1847 (2). She was born in 1827 at Teignmouth in Devon, daughter of the Honorable and Reverend Edward William Pellew and his wife née Marianne Winthrop. Her father was the incumbent of St James's church in Bury St Edmunds.

Mary Elizabeth Anderson. She was born at Wolverton, Warwickshire in 1848. She died in 1880.

Edward Thomas Anderson. He was born in 1850, and was educated at the King Edward VI School in Bury St Edmunds. He served in the Indian Police, and died unmarried in 1872.

James Winthrop Anderson. He was born on 29 August 1851 at Felsham Rectory in Suffolk (3), and was educated at the King Edward VI School in Bury St Edmunds. He emigrated to New Zealand in 1872 with his brother William Donald Anderson, where they became farmers. In 1880 he married Margaret Montgomerie 1862-1914, the second daughter of Captain Alexander Montgomerie of Annick Lodge, Ayrshire in Scotland and of Eaglesham, Wanganui in New Zealand and his wife née Elizabeth Wright. She was the sister of Bettie Montgomerie who became the wife of his brother William Donald Anderson. He died in 1927.

William Donald Anderson. He was born at Barningham Winter in 1853, and was educated at Marlborough College. He emigrated to New Zealand in 1872 with his brother James Winthrop Anderson, where they became farmers. In 1879 he married Bettie Montgomerie, the eldest daughter of Captain Alexander Montgomerie and his wife née Elizabeth Wright. She was the sister of Margaret Montgomerie who became the wife of his brother James Winthrop Anderson.

Helen Margaret Anderson. She was born at Barningham Winter in 1856. In 1884 she was married to William Forster Mills of Ruddington House, Ruddington in Nottinghamshire, and died on 27 February 1953 at Cullompton in Devon. Her husband died on 1 January 1918.

Arthur Robert Anderson. He was born at Barningham Winter in 1859. He become a clergyman, and died on 21 December 1950.

Georgina Gertrude Anderson. She was born in 1863, and died in 1953. In 1884 to 1885 she visited New Zealand with her mother and wrote an account of her visit, sailing on the SS Doric and describing their arrival in Wellington, travelling to Wanganui by land, the wedding of her sister at Wanganui and then travelling to the South Island via Palmerston North, Masterton and Wellington, sailing to Christchurch, back to Wanganui, the Pink and White Terraces at Rotorua, the Blue and Green Lakes, Taupo, Tarawera, and their voyage back to England on the SS Rimukaka (4).

In 1866 their father the Reverend James Richard Anderson became Rector of Metton (5) with Felbrigg near Cromer.

He died in Erpingham, Norfolk in 1872, and was buried at Metton.