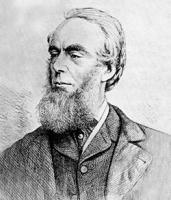 James Bateman was born on 18 July 1812 at Redivals near Bury in Lancashire, the son of John Bateman 1782-1858 of Knypersley Hall in Staffordshire and Tolson Hall in Westmorland, and his wife nee Elizabeth Holt,daughter of George Holt of Redivals.

He studied at Lincoln College in Oxford, having matriculated on 2 April 1829 aged seventeen. He graduated Bachelor of Arts from Magdalen College in 1834 and Master of Arts in 1845 (1).

John Bateman 1839-1910. Born at Biddulph Grange on 19 March 1839, he was educated at Brighton College in Sussex, and then at Trinity College in Cambridge which he entered on 1 December 1856. He became a Justice of the Peace and Deputy Lieutenant for Staffordshire and Essex. He died on 12 October 1910 (2).

Rowland Bateman. He was born in 1840. He studied at Magdalen College in Oxford, where he matriculated on 15 December 1859 aged nineteen, graduating Bachelor of Arts in 1864 and Master of Arts in 1867 (3).

Robert Bateman. He became an artist.

James Bateman was a famous plantsman. Even while an Oxford undergraduate he became interested in orchids and other tropical plants (4). Specimens that he received from Guatemala led him to publish the largest book ever devoted to orchids (5). He was elected a fellow of the Linnean Society in 1833, and of the Royal Society in 1838.

At first James Bateman and his wife lived at Knypersley Hall, where he grew a large collection of orchids. But in 1840 they moved nearby to nearby Biddulph Grange, where James Bateman created a large and elaborate garden (6), now owned and restored by the National Trust.

James Bateman and his wife left Biddulph Grange in 1869, moving to a house at Hyde Park Gate in London, and then in 1884 to Springbank, Victoria Road, Worthing in Sussex, where he died on 27 November 1897. He was buried on 2 December 1897 in Worthing cemetery.