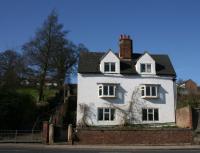 From her girlhood she lived with her unmarried aunts Anne Gould and Catherine Gould, who resided at Hanson Grange with their bachelor brother Thomas Gould until his death in 1878.

Thereafter the two aunts and Eliza Wright moved to Hanson Mount in Church Street, Ashbourne where they all lived to the end of their lives.

Anne Gould predeceased her younger sister Catherine Gould, who died in 1910 aged 101, bequeathing her house to Eliza Wright, her companion and niece.

There was some uncertainty to the exact provisions of the Will of Catherine Gould, but an Agreement was reached dated 1 May 1911 with all the heirs to convey her property to Eliza Wright for her lifetime.

She was buried at Thorpe in Derbyshire (1), where there is a memorial gravestone.