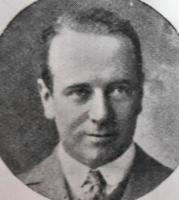 Lance Thackeray needs no introduction to postcard collectors. His gentle wit, satirising Edwardian society, is well known and has never been surpassed.

But who was he? Where did he come from? What happened to him?

Lance Thackeray is an elusive man, a bachelor leaving no private papers. Sociable and enjoying life, yet always edging away. In his postcard designs he eludes us too. Drawing just enough, then setting the imagination working. The greater our human experience – pretensions, hopes, desires, disasters, follies – the more we smile. Not at the people he draws, but with them. Sadly he never became the major English artist he might have been. Lance Thackeray died in 1916 during the First World War.

In his centenary year a pioneering biography entitled Lance Thackeray : His Life and Art by Tom Askey was published, based on many years of research.

Copies can be purchased by pasting the following link into your browser, and following the instructions there given: http://www.shieldcrest.co.uk/tom-askey.html

This biography is both a useful reference work and a highly readable book, greatly welcomed by those who love the art of Lance Thackeray.